Madonna, the "Queen of Pop" came back a second time at Stade de France with opening acts, French DJ martin Solveig. For more than 1 hour and 45 minutes, Madonna gave a great show that meets the high expectations for her fans' delight came to support her this evening. 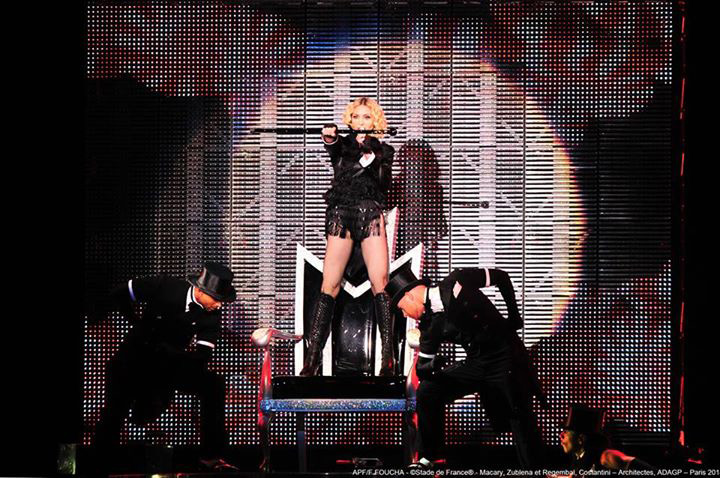 On 20 & 21 September 2008, Stade de France welcomed Madonna, the "Queen of Pop", for the first time in its history. For her two scheduled dates at Stade de France, the Star did things on a grand scale, with two gigantic "M's" flanking the "royal" stage.

Madonna, born Madonna Louise Veronica Ciccone on 16 August 1958 in Bay City, USA. She grew up in a suburb of Detroit with her six brothers. She lost her mother to cancer at the age of five.

Aged 17, she ended her dance studies and set off to conquer New York. Madonna had string of odd jobs and auditions until she got noticed by some Belgian producers. She then signed with Sire Records, with whom she recorded her first album, "Madonna", which was released in July 1983. The album was a huge hit with 10 million copies sold worldwide. The following year, Madonna released her famous song, "Like a Virgin". It was another huge success! 21 million copies were sold and her album remained in the UK Top 100 for 152 weeks. Madonna became an unmissable star and had a series of successful albums, tours, films and soundtracks: Dick Tracy in 1990, Erotica in 1992, Bedtime Stories in 1994, Evita in 1996 and Ray of Light in 1998.

In 2005, she released a new album, "Confessions on a Dance Floor", which contained the global hit, "Hung Up". Her album and her single got to number 1. In 2006, she began a new tour, "The Confession Tour". She appeared in France, at Paris Bercy, where she put on a big show.

In 2006, while helping to build an orphanage in Malawi, she began the process of adopting her son, "David". This adoption was keenly followed and criticised by the international press.

In April 2008, Madonna released her eleventh album, "Hard Candy", on which she collaborated with Timbaland, Danja, Pharrell Williams and Justin Timberlake.

Throughout her career, Madonna has collected rewards as well as tabloid headlines, due to her many provocations that made her the Queen of Pop.

After you have completed and submitted this contact form, the Consortium Stade de France (SA with a registered capital of €29,727,558 - ZAC Cornillon North - 93210 Saint-Denis La Plaine / RCS Bobigny: 399 452 564) will collect any personal data contained therein in order to contact you and offer you its products and services. Personal data are retained for as long as required in order that you may be contacted again and are intended for the marketing and sales departments of the Consortium Stade de France.

If the e-mailing service is activated your personal data will be collected and recorded by the Consortium Stade de France in order that you may receive offers and content tailored to your interests. In this case personal data are retained for 3 years from the date they are first collected or of our last contact and are intended for the Marketing Department of the Consortium Stade de France.

In accordance with the "Informatique et Libertés" law of 6 January 1978 as amended and of the Regulation (EU) 2016/679, you have the right of access, rectification, portability and deletion of these personal data or a right to limit processing.

You can exercise your rights and oppose data processing at any time by sending your request:

Your request must include at the very least your surname, first name, e-mail address, mailing address, and a copy of an identity document bearing your signature.

For any questions regarding the processing of your personal data you can contact our Data Protection Officer by e-mail at: dpo@stadefrance.com

You have the right to lodge a complaint with the CNIL :

Your requests will be processed in a timely and appropriate manner. If the applicable law provides for administrative fees in order to fulfil your request(s), these fees may be invoiced by the Consortium Stade de France.